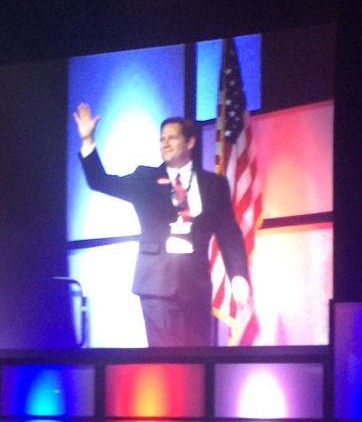 AUSTIN- Justice Jeff Boyd kept busy during the Republican Party of Texas State Convention, which was held June 5-7 at the Fort Worth Convention Center.

Justice Boyd was honored to speak at the Texas County Chairman’s Republican Association (TRCCA) breakfast. Boyd was a congressional sponsor of the event, and was proud to join other great Republican leaders including Land Commissioner candidate George P. Bush and Congressman Roger Williams.

The Judge received a warm welcome from thousands of GOP delegates and guests at the first general session as he was introduced with his Supreme Court colleagues. During this time, audience members were also introduced to our Texas Republican State Representatives and heard from various speakers, including Governor Rick Perry.

One of Justice Boyd’s most exciting events of the week was the judicial panel breakout session. Fellow justices Jeff Brown and Eva Guzman accompanied Justice Boyd on the panel. This session drew in a large crowd who had many questions on the processes of the Supreme Court and the role of a Justice.

Following the panel, Justice Boyd attended the Texas Federation of Republican Women reception honoring the women Supreme Court Justices, Eva Guzman and Debra Lehrmann. The Judge was proud to be the second largest sponsor for this event and to pay tribute to his female colleagues. Many elected officials and candidates attended the reception, including State Senator and Attorney General candidate Ken Paxton, and State Senator and Lieutenant Governor candidate Dan Patrick.

Throughout the week, Justice Boyd met with many supportive Republicans from across the state. He was reacquainted with old friends and made many new friends, and is excited to have their support as he heads into the November 4th election.